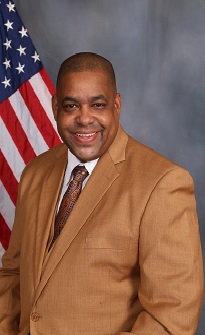 Sheriff Richard Roundtree was born and raised in Augusta. He attended public schools in Richmond County and graduated from T.W. Josey High School where he was a standout student athlete.

He was awarded a scholarship to play football at South Carolina State University and graduated with a Bachelor of Science degree in Criminal Justice in 1991. Sheriff Roundtree earned a Masters of Education in counseling and psychology from Troy State University in 2006.

Sheriff Roundtree attended the FBI National Academy in 2008 and believes in continual education and learning as a professional. Sheriff Roundtree has completed more than 3,000 hours of formal law enforcement training including:

Sheriff Roundtree has been an instructor for the local police academies for more than 17 years where he has taught a variety of topics including homicides, violent crimes and constitutional law.

Sheriff Roundtree believes and supports community involvement. He co-founded the Dad’s in Action organization, a mentoring group for at-risk children, and has served as Vice President of the Richmond County Council of PTAs. He also serves on the Board of Directors for Easter Seals of Augusta.

After he was elected Sheriff of Augusta-Richmond County in 2012, Sheriff Roundtree immediately shared his initiatives designed to engage and interact with the community.

Central to that plan is the creation of the Community Services Division within the Sheriff’s Office and
ongoing community programs, such as the neighborhood watch initiative and CHAMPS anti-drug program in county schools,

Sheriff Roundtree has identified five initiatives that he will develop in 2013, each designed to improve community relations and boost internal morale.